Distributed and Collaborative Hapto-Virtual Environments and Applications: Effects of Networking Impairments on Quality of Experience 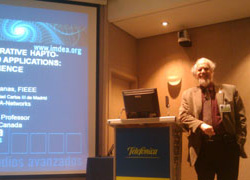 Multimedia Communications, involving traditional media such as audio, video, text, 2D graphics, have become parts of everyday e-life. New digitalmedia, such as Virtual Reality and Haptics, have now added new dimensions to multimedia tele-collaboration. This presentation will introduce basic issues on Distributed and Collaborative Virtual Environments, where the feeling of touch (haptics) and its transmission over networks is becoming essential. Various applications will be described ranging from industrial training to e-commerce to medical education. Effects of networking =93quality of experience on collaborative hapto-virtual applications will be discussed and methods for delay and jitter compensation will be described.

As well as in academia, he has wide experience working both with government and industry. In the late nineties he worked with the Communications Research Centre (CRC) of Industry Canada focusing on Advanced Distributed Simulation and Distributed Virtual Environments, with applications to defense, telemedicine, training and telecollaboration. He was earlier with IBM, BULL, INRIA and NORTEL, on sabbatical leaves. Nicolas Georganas is a Fellow of the IEEE , of the Academy of Science, of the Canadian Academy of Engineering and of the Engineering Institute of Canada (EIC). He has been the General Chair of three major international conferences – ACM Multimedia 2001, IEEE Multimedia Systems’97 and the IEEE Canadian Conference on Electrical and Computer Engineering, 1990. He has published over 440 papers and supervised 38 PhD and 74 MSc theses. His work is widely recognized and in 2007 alone he received 5 professional awards, including the Order of Canada and the IEEE Canada Computer Medal.