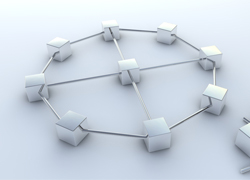 Sampling a large network with a given distribution has been identified as a useful operation to build network overlays. For example, constructing small world network topologies can be done by sampling with a probability that depends on the distance to a given node. In this talk we describe algorithms that can be used by a source node to randomly select a node in a network with probability distributions that depend on their distance. The first algorithm proposed is fully local and uses a uniform sampling service (that could be implemented with, for instance, a gossip-based protocol). This algorithm is of iterative nature and has a parameter r that gives its number of iterations. We prove that the obtained sampling distribution converges to the desired distribution as r grows. The second algorithm presented is fully distributed and uses a new class of random walks, that we call Drifting Random Walks. A key feature of this algorithm is that it finishes in a bounded number of hops with the exact probability distribution. We complement the analyses of the algorithms with simulations.