Design and Evaluation of a robust delay-based congestion protocol 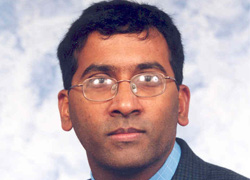 In the second part of the talk, we discuss the issues in incremental deployment of PERT in the current Internet where loss-based TCP dominates. We modify PERT to be able to compete with TCP. In addition, we enhance PERT to exhibit better characteristics than TCP in high-speed high-delay networks. We will present results of evaluating PERT on real networks.

Who is Narasimha Reddy?

Narasimha Reddy is a J.W. Runyon Professor in the department of Electrical and Computer Engineering at Texas A & M University. He is currently on sabbatical holding a Banco Santander Catedra de Excelencia at Unviersity of Carlos III, Madrid.

Reddy received the M.S. and Ph.D degrees in Computer Engineering from the University of Illinois at Urbana-Champaign in May 1987 and August 1990 respectively. During 1990-1995, he was a Research Staff Member at IBM Almaden Research Center in San Jose, California.

Reddy holds five patents and was awarded a technical accomplishment award While at IBM. He has received an NSF Career Award in 1996. His honors include an outstanding professor award during 1997-1998, and 2003-2004, a Distinguished Achievement award for teaching from the former students association of Texas A&M University and a citation “for one of the most influential papers from the 1st ACM Multimedia conference”. Reddy is an IEEE Fellow and is a member of ACM.