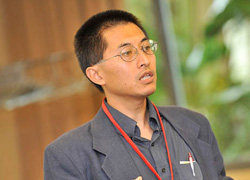 CongDuc Pham obtained his PhD in Computer Science in July 1997 at the LIP6 Laboratory (Laboratoire d’Informatique de Paris 6), University Pierre and Marie Curie. He also received his Habilitation in 2003 from University Claude Bernard, Lyon, France. He spent one year at the University of California, Los Angeles (UCLA) as a post-doctoral fellow. From 1998 to 2005, he was associate professor at the university of Lyon, member of the INRIA RESO project in the LIP laboratory at the ENS Lyon. He is now professor at the University of Pau and has served as the director of the LIUPPA laboratory from 2006 to 2009. His research interests include parallel discrete event simulation, cluster computing, active networking, networking protocols, congestion control and wireless sensor networks. He has published more than 50 papers in international conferences and journals, has been reviewers for a numerous of international conferences and magazines, and has participate to many conference program committees. He has served as co-editors for 2 special issues of international journals (Future Generation Computer Systems and Annals of Telecom). He has co-organized 2 workhops and gave 7 tutorials in international conferences. He is a member of IEEE.