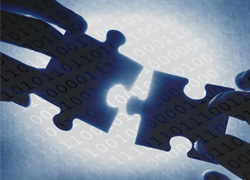 The talk will cover recent results on cooperative communication schemes for ad hoc and sensor networks. We will first discuss the offline computation of optimal policies for multi-hop virtual MISO transmission for distributed ad hoc networks in the presence of channel impairments such as path loss and multipath fading. Thus, we will elaborate on heuristic and opportunistic routing policies, by comparing their performance to that of optimal routing. Subsequently, we will illustrate how cooperation concepts can be utilized in the case of multi-hop networks exploiting the spectrum leasing paradigm, where primary and secondary networks share the same portion of the spectrum. Finally, we will discuss optimal online policies for data gathering in multi-hop sensor networks with energy harvesting capabilities.

Who is Michele Rossi?

Michele Rossi is an Assistant Professor at the Department of Information Engineering (DEI) of the University of Padova. His research interests lie in the areas of modeling, optimization and network protocol design for wireless networks and Internet of Things. He has published scientific papers on these subjects in International Conferences and Journals and has been the recipient of four best paper awards from IEEE. Since 2002, Dr.
Rossi has been working on numerous European and local projects on Wireless Sensor Networks, such as EYES (EU, 2002-2005), e-SENSE (EU, 2004-2007), SENSEI (EU, 2007-2010), IOT-A (EU, 2011-present), WISE-WAI (funded by CARIPARO, 2007-2010), SWAP (EU, running) and MOSAIC (2009-present, funded by the University of Padova). From 2005 to 2009 he has collaborated with the Ubiquitous Networking Research group at DOCOMO Euro-Labs (Munich, Germany). Dr. Rossi is currently Editor of IEEE Transactions on Wireless Communications, has been on the TPC of numerous international conferences and workshops (as TPC member, general co-chair or co-organizer). For more info visit: http://www.dei.unipd.it/~rossi/

This talk is based on two publications available at:
http://arxiv.org/pdf/1203.3143v1.pdf
http://www.dei.unipd.it/~rossi/papers/IEEETWFeb2011.pdf