Contention resolution and packet queuing on a multiple access channel 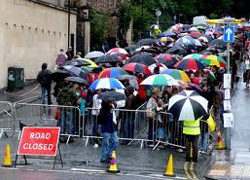 Dr. Kowalski will present recent advances on contention resolution and packet queuing on a multiple access channel. His will include description of algorithms, both already known and newly developed, accompanied by theoretical analysis of queue sizes and latency. He will conclude with showing and elaborating on selected simulation results that support theoretical formulas.

Who is Dariusz Kowalski?

Institute IMDEA Networks has announced that Dr. Dariusz Kowaslki has joined the team in September 2011 in the role of Visiting Researcher, bringing with him extensive experience in algorithms and data structures, fault-tolerant aspects of computer science, and distributed, parallel, network and mobile computing. His research expertise earned the recognition of his alma mater in 2001 and 2005, when he received the Award of the Rector of the Warsaw University, in Poland, for research excellence. At the Institute Dr. Kowalski will be focusing on areas such as reliability of wireless broadcast protocols with block acknowledgment, design and analysis of better epidemic communication protocols, energy aspects of dynamic distributed work scheduling protocols, queuing aspects of distributed multi-access communication processes, models and algorithms for micro- and nano-scale wireless communication and computing. As well as pursuing his own interests, Dr. Kowalski will be involved in the mentoring of young researchers.

In the last few years Dr. Kowalski has developed and analyzed several algorithms for topics including communication in wireless and ad hoc networks (including multi-broadcast, leader election and routing algorithms); contention-resolution in a multiple-access channel; traffic-scheduling; classical distributed computing problems, such as consensus, work scheduling and shared-memory store&collect; dynamic distributed computing problems, including group communication, rumor and work scheduling; and other related aspects of distributed and network computing, including quantum model of computation, fault-tolerance, and combinatorial group testing.

Dr. Kowalski has authored nearly a hundred peer-reviewed publications, including thirty one journal articles. He is a reviewer for technical journals, for example IEEE Transactions on Parallel and Distributed Systems or the Journal of the ACM, as well as for conferences including some of the most referred international events in the field, such as the IEEE International Conference on Computer Communications (INFOCOM) and the IEEE Global Communications Conference (GLOBECOM). His service to the research profession takes the shape, amongst other activities, of participation on over thirty technical program & organizational committees for scientific events. Dr. Kowalski is a recipient of the prestigious NSF-NATO’s Award.

You can find more information about Dr. Kowalski and his publications at http://www.csc.liv.ac.uk/~darek/