Computing: A small step from Classical to Quantum 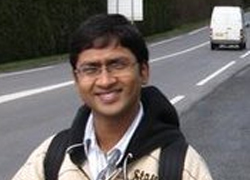 The Theory of Computing is almost a hundred year old now. Its roots can actually be traced to the Entscheidungsproblem posed by David Hilbert in 1928. Another concrete theory in Physics called the Quantum Mechanics had its inceptions almost two hundred years ago (with Thomas Young’s Double Slit Experiment in 1803) but actually started in the late 19th century. Today, Quantum Mechanics is proven to be the most successful theory of Physics. So the natural question to ask was that while the statement of Church-Turing Thesis is seen to be a statement of physics (laws of nature), then it should be compatible with the theory of Quantum Mechanics!

Given above motivation. In this seminar, we first talk about the postulates of quantum mechanics, basics in computational complexity theory, a brief discussion on qubit (the quantum bit) and then the theory of quantum algorithms and the complexity class BQP, the quantum analogue of P in Computational Complexity Theory. Given above background we move on to understanding the basics of Quantum Networking and Quantum Cryptography in somewhat detail.

Who is Kshitiz Verma?

The speaker for this seminar, Mr. Kshitiz Verma is currently a first year Research Assistant at IMDEA Networks Spain.