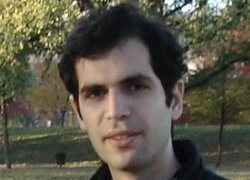 Wireless ad hoc networks have emerged to be used in scenarios where it is required or desired to have wireless communications among a variety of devices without relying on any infrastructure or central management.

As part of this talk, I will describe one of our proposed local broadcast algorithms and show why it can guarantee full delivery with a small number of transmissions.

Dr. Khabbazian received his B.Sc. degree in computer engineering from Sharif University of Technology, and his M.A.Sc and Ph.D. degrees both in electrical and computer engineering from University of Victoria and University of British Columbia, respectively. He is currently a postdoctoral fellow at MIT Computer Science and Artificial Intelligence Lab, where he is working with Professor Lynch on designing and analyzing distributed algorithms. Dr. Khabbazian has received several awards including the University of Victoria Graduate Fellowship, the University of British Columbia Graduate Fellowship, Pacific Century Award and the Natural Sciences and Engineering Research Council of Canada Post Doctorate Fellowship. His research interest includes wireless networks, network security, applied cryptography and distributed algorithms.