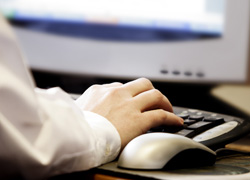 Auctions have regained interest from researchers due to its different new applications (Google AdWords auctions, cloud computing auctions, privacy auctions, and white spaces spectrum auctions). In this work in particular we explore auctions for spectrum that can be allocated either to a single bidder (for licensed use) or to a collection of bidders (for unlicensed use). In this auction, a number of individual bidders all try to get the spectrum for their exclusive use and a group of other bidders try to get the spectrum for their collective use. The objective is to study these auctions and compare their different properties.

Who is Alonso Silva?

Alonso Silva is currently a postdoctoral researcher in the Department of EECS at the University of California, Berkeley, working with Professor Jean Walrand. Previously, he has worked as a postdoctoral researcher at the Hipercom Team at INRIA Rocquencourt working with Professor Philippe Jacquet and as a Research Consultant/Intern at Bell Labs Headquarters in Murray Hill, New Jersey, working with Professor Iraj Saniee. His Ph.D. was done at INRIA Sophia-Antipolis under the direction of Professor Eitan Altman. He obtained his Ph.D. degree in Physics from the École Supérieure d’Électricité in June 2010. He received his B.Sc. of Mathematical Engineering and his Mathematical Engineering degree (summa cum laude) from the department of Mathematical Engineering at the Universidad de Chile, in 2004 and 2006.