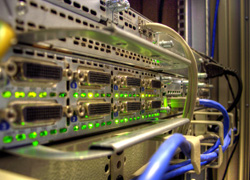 The delivery of live video streams over the plain old best-effort Internet is a major challenge. This talk deals with the issue of under-provisioning in the main delivery platforms, i.e. when the equipments that are in charge of delivering the video do not have enough upload capacity to serve all clients. In general, Content Delivery Networks (like Akamai) make a good job in ensuring large-scale delivery of the most popular streams through edge-servers that are located close to the clients. However, the delivery of video from the origin server to the edge-servers requires some attention. We present in this talk a algorithmic solution to deliver the flow on the edge servers. Then, we will focus on the case of gamers who wants to broadcast screen-captured video of their games, in live. Each stream should be sent to a small number of other players, with a very low delay. This scenario is one of the use cases where using a peer-to-peer system really makes sense. However gamers watch several videos simultaneously, so they have to share their uplink contribution among the peer-to-peer systems they participate in. We study here algorithmic solutions to determine optimal resource allocations. Finally, in a more general perspective, we model the under-provisioning of delivery system, meaning that equipments have collectively not enough resources to guarantee the full delivery of the stream.

Who is Gwendal Simon?

Gwendal Simon received his Master Degree in Computer Science in 2000 and his PhD degree in Computer Science in 2004. From 2001 to 2006 he was a researcher at Orange Labs, where he worked on spontaneous networks and social media innovations. Since 2006, he has been Associate Professor at Telecom Bretagne, a graduate engineering school within the Institut Telecom. He is visiting researcher at University of Waterloo since September 2011