A Control Theoretic Approach to Distributed Optimal Configuration of 802.11 WLANs 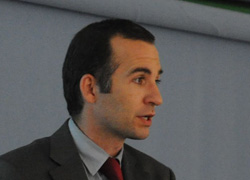 The optimal configuration of the contention parameters of a WLAN depends on the network conditions in terms of number of stations and the traffic they generate. Following this observation, a considerable effort in the literature has been devoted to the design of distributed algorithms that optimally configure the WLAN parameters based on current conditions. In this work we propose a novel algorithm that, in contrast to previous proposals which are mostly based on heuristics, is sustained by mathematical foundations from multivariable control theory. A key advantage of the algorithm over existing approaches is that it is compliant with the 802.11 standard and can be implemented with current wireless cards without introducing any changes into the hardware or firmware. We study the performance of our proposal by means of theoretical analysis, simulations and a real implementation. Results show that the algorithm substantially outperforms previous approaches in terms of throughput and delay.