PhD Thesis defense: The Role of Topology and Contracts in Internet Content Delivery

The Internet depends on economic relationships between ASes (Autonomous Systems), which come in different shapes and sizes – transit, content, and access networks. CDNs (Content delivery networks) are also a pivotal part of the Internet ecosystem and construct their overlays for faster content delivery. With the evolving Internet topology and traffic growth, there is a need to study the cache deployments of CDNs to optimize cost while meeting performance requirements. The bilateral contracts enforce the routing of traffic between neighbouring ASes and are applied recursively: traffic that an AS sends to its neighbour is then controlled by the contracts of that neighbour. The lack of routing flexibility, little control over the quality of the end-to-end path are some of the limitations with the existing bilateral model, and they need to be overcome for achieving end-to-end performance guarantees. Furthermore, due to general reluctance of ASes to disclose their interconnection agreements, inference of inter-AS economic relationships depend on routing and forwarding data from measurements. Since the inferences are imperfect, this necessitates building robust algorithmic strategies to characterize ASes with a significantly higher accuracy.

In this thesis, we first study the problem of optimizing multi-AS deployments of CDN caches in the Internet core. Our work is of significant practical relevance since it formalizes the planning process that all CDN operators must follow to reduce the operational cost of their overlay networks, while meeting the performance requirements of their end users. Next, we focus on developing a temporal cone (TC) algorithm that detects PFS (Provider-free ASes). By delivering a significant portion of Internet traffic, PFS is highly relevant to the overall resilience of the Internet. We detect PFS from public datasets of inter-AS economic relationships, utilizing topological statistics (customer cones of ASes) and temporal diversity. Finally, we focus on a multilateral contractual arrangement and develop algorithms for optimizing the cost of transit and access ASes. In particular, we implement Bertsekas auction algorithm for the optimal cost assignment of access ASes to transit ASes. Furthermore, we implement an epsilon-greedy bandit algorithm for optimizing the price of transit ASes and show its learning potential.

About Syed Hasan:
Syed Hasan received his bachelor’s degree in Electronics and Communication (with Distinction) from Osmania University, Hyderabad, India, in 2007. In 2009, he received a M.Sc. in Communications and Computer Security from Institut Eurecom/Telecom ParisTech. He is currently a Ph.D. candidate in Telematics Engineering at University Carlos III of Madrid. Syed Hasan was part of the IMDEA Networks Institute between 2009 and 2013. His full birth name is Syed Anwar Ul Hasan and use the former (shorter) name: Syed Hasan for research publications. He is supervised by Dr. Sergey Gorinsky. He had collaborated and worked with Prof. Constantine Dovrolis (Georgia Tech) and Prof. Ramesh Sitaraman (University of Massachusetts, Amherst). During Spring 2012, he was visiting Georgia Institute of Technology (USA), and was advised by Prof. Constantine Dovrolis. During his time as a M.Sc. student in Sophia Antipolis, he undertook an Internship with Thales Alenia Space, Cannes. His research interests include Internet Topology and Internet Economics, Optimization for Internet-scale distributed Networks/Systems. 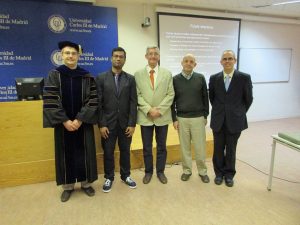