The team, made up of Domenico Giustiniano (Research Associate Professor), Borja Genovés Guzmán (Post-doc Researcher) and Muhammad Sarmad Shahab Mir (PhD Student) from IMDEA Networks, as well as Ambuj Varshney (Post-doc Researcher), from the University of California, Berkeley, participated in European Researchers’ Night on 27 November, an event promoted by the Regional Ministry of Science, Universities and Innovation and coordinated by the madri+d Foundation (funded by the European Union within its research and innovation programme, Horizon 2020).

The design of the first battery-free IoT device prototype that employs two cutting-edge technologies – radiofrequency (RF) LiFi and backscatter – was the main topic of this online event ‘Green Light for the Earth’. It was well attended, including students in years 3 and 4 of obligatory secondary and baccalaureate from the Isaac Albéniz (Leganés) and Clara Campoamor (Móstoles) Secondary Schools. 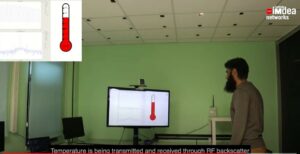 Under the motto “Creating sustainable technology is possible” the researchers then showed a video (also shown at the Science and Innovation Week) and a demo that got participants’ interested due to its potential applications in the field, for example, for the Internet of Things (a preliminary version of this work was published at the beginning of the year at the prestigious conference ACM Mobisys 2020. The future results of the project can be followed on the website www.enlightem.eu, as well as on social media). As one of the teachers commented: ‘The students participated and paid close attention at the meeting. We congratulate them on the devices they are developing, which will soon become part of our daily lives’.

Arturo Azcorra, director of the IMDEA Networks Institute, also participated, from Madrid’s Residencia de Estudiantes, at the meeting “Great female scientists on the big screen”, during which representatives from the seven IMDEA Institutes spoke about the careers of female scientists renowned in their fields of research who are well-deserving of being stars on the ‘big screen’. Azcorra decided to speak about the case of a woman who was not an actual researcher, but a Hollywood star: Hedy Lamarr, precursor of 5G.

The director of IMDEA Networks called Lamarr “a modern Leonardo da Vinci”, due to her (self-taught) contributions to science, such as her studies on airplane aerodynamics and the first frequency-hopping spread spectrum to guide torpedoes, “something with a highly-complex technical depth’”(the start of a research field that would later be used for 3G). A life like a film for a woman whose real name was Hedwig Eva Maria Kiesler and who – as Azcorra pointed out – “managed to make a multitude of things, and all of them in an extraordinary way”. 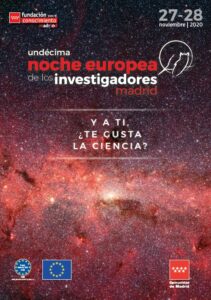 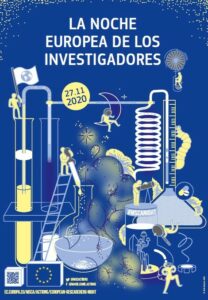 Also, within the activities of the European Researchers´ Night, IMDEA Networks contributed the experiences – within the European Commission’s Marie Skłodowska-Curie Actions – of researchers like Nina Grosheva, Dayrene Frometa and Muhammad Sarmad Shahab Mir, who talked about their work in the field of technological research. You can follow them on our social media, like Twitter, YouTube…